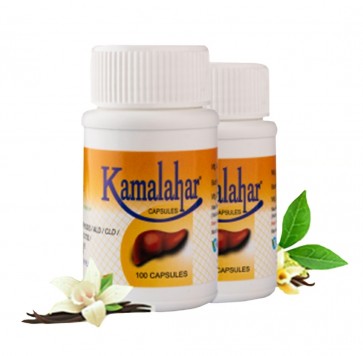 Kamalahar is an indigenous ayurvedic medicine that is very effective in the treatment of hepatitis, jaundice, fatty liver, cirrhosis, ascites and other liver disorders. Kamalahar prevents hepatic disorders and stimulates appetite and growth. It also helps in the regeneration of hepatic cells.

Kamlahar is highly effective in the treatment of :

Kamalahar is indigenous ayurvedic medicine for hepatitis, cirrhosis, fatty liver, ascites, jaundice and liver disorders. It is used in the treatment of the following diseases:

Hepatitis is liver inflammation, most commonly caused by a viral infection.

Many illnesses and conditions can cause inflammation of the liver, for example, contaminated food/water, drugs, alcohol, chemicals, etc. The liver performs many important functions which keep our bodies healthy, and when the liver is inflamed, it is unable to function properly, which leads to problems. The most common causes of viral hepatitis are five viruses: Hepatitis A, Hepatitis B, Hepatitis C, Hepatitis D, and Hepatitis E. In addition to the hepatitis viruses, other viruses that can cause hepatitis include herpes simplex, cytomegalovirus, Epstein-Barr virus, and yellow fever. Typical signs and symptoms of hepatitis include jaundice (yellow discoloration of the skin and sclera of the eyes), anorexia (loss of appetite), an enlarged, tender liver (hepatomegaly), abdominal pain and tenderness, nausea and vomiting, fever, and weight loss.

The Hepatitis A virus can spread through the ingestion of contaminated food or water, especially where unsanitary conditions allow water or food to become contaminated by human waste containing hepatitis A (the fecal-oral mode of transmission). Hepatitis A typically is spread among household members and close contacts through the passage of oral secretions (intimate kissing) or stool (poor hand washing). It also is common to have the infection spread to customers in restaurants and among children and workers in day care centers if hand washing and sanitary precautions are not observed.

Hepatitis B can spread by sexual contact, the transfer of blood or serum through shared needles in drug abusers, accidental needle sticks with needles contaminated with infected blood, blood transfusions, hemodialysis, and by infected mothers to their newborns. The infection also can be spread by tattooing, body piercing, and sharing razors and toothbrushes (if there is contamination with infected blood). Patients with chronic hepatitis B infection also are at risk of developing cirrhosis, liver failure and liver cancer.

Hepatitis E virus can spread through the ingestion of contaminated food or water, especially where unsanitary conditions allow water or food to become contaminated by human waste containing the virus. Infection with this virus was first documented in 1955 during an outbreak in New Delhi, India. Consumption of faecally contaminated drinking water has given rise to epidemics, and the ingestion of raw or uncooked shellfish has been the source of sporadic cases in endemic areas. There is a possibility of zoonotic spread of the virus, since several non-human primates, pigs, cows, sheep, goats and rodents are susceptible to infection. Hepatitis E is prevalent in most developing countries, and common in any country with a hot climate. It is widespread in Southeast Asia, northern and central Africa, India, and Central America.

Jaundice is the yellowish staining of the skin and sclerae (the whites of the eyes) that is caused by high levels of the chemical bilirubin in the blood.

The color of the skin and sclerae vary depending on the level of bilirubin. When the bilirubin level is mildly elevated, they are yellowish. When the bilirubin level is high, they tend to be brown. Besides yellowing of the skin and eyes and having dark urine and light stools, the symptom that is most frequently associated with jaundice is itching, medically known as pruritus. The itching associated with jaundice can sometimes be so severe that it causes patients to scratch their skin "raw" and have trouble sleeping.

The liver has many functions. One of the liver's functions is to produce and secrete bile into the intestines to help digest dietary fat. Another is to remove toxic chemicals or waste products, such as bilirubin, from the blood. Jaundice occurs when there is:

Cirrhosis is a consequence of chronic liver disease and is characterized by an abnormal liver structure.

Cirrhosis is most commonly caused by alcoholism, hepatitis B and C, and fatty liver disease, but it has many other possible causes. The diseases that lead to cirrhosis injure and kill liver cells and the inflammation and repair that is associated with the dying liver cells causes scar tissue to form. The liver cells that do not die multiply in an attempt to replace the cells that have died. This results in clusters of newly-formed liver cells (regenerative nodules) within the scar tissue.

Some of the common symptoms and signs of cirrhosis include:

Alcoholic hepatitis is due to excessive intake of alcohol.

Symptoms are jaundice, ascites (fluid accumulation in the abdominal cavity), fatigue and hepatic encephalopathy (brain dysfunction due to liver failure). Alcoholic hepatitis can vary from mild with only liver enzyme elevation to severe liver inflammation with development of jaundice, prolonged prothrombin time, and even liver failure.

Drugs induced hepatitis is caused by intake of certain drugs or chemicals. Certain medicinal agents, when taken in excess and sometimes even when introduced within therapeutic ranges, may injure the organ. Other chemical agents, such as those used in laboratories and industries can also cause liver damage.

Fatty liver is commonly associated with alcohol or metabolic syndrome (diabetes, hypertension, obesity and dyslipidemia), but can also be due to many other reasons.

Fatty liver, also known as fatty liver disease (FLD) is a reversible condition where large vacuoles of triglyceride fat accumulate in liver cells via the process of abnormal retention of lipids within a cell. Despite having multiple causes, fatty liver can be considered a single disease that occurs worldwide in those with excessive alcohol intake and those who are obese (with or without effects of insulin resistance). The condition is also associated with other diseases that influence fat metabolism.

Accumulation of fat may also be accompanied by a progressive inflammation of the liver (hepatitis). By considering the contribution by alcohol, fatty liver may be termed alcoholic or non-alcoholic fatty liver disease.

The most common cause of enlarged liver is an accumulation of fat in the liver.

The collection of fat in the liver can be a result of obesity and diabetes. However, it is not at all necessary that every overweight person will develop enlarged liver problems. Other causes of enlarged liver are viral infection like hepatitis A, hepatitis B or hepatitis C, iron deposits in the liver, and heavy consumption of alcohol. Serious ailments like diabetes, tuberculosis, liver cancer, congestive heart failure or leukemia and an inadequate diet or side effects of some drugs are other factors that can lead to enlarged liver.

Enlarged liver is often referred to as hepatomegaly. When the liver becomes excessively large, pain is experienced when the abdomen is touched. Some discomfort arises when the liver puts pressure on the surrounding organs and nerves due to enlargement. When the liver stops functioning normally due to its enlarged state, it can lead to jaundice.

Excessive accumulation of fat within the liver cells due to alcoholism, obesity, diabetes, drugs (like corticosteroids, tetracycline and aspirin) or elevated serum triglyceride levels can lead to sluggish liver function. Other cause for sluggish liver function is intrahepatic problems which occur due to over-exposure to food additives, solvents (cleaning materials, formaldehyde, toluene, benzene, etc.), heavy metals (lead, mercury, cadmium, arsenic, nickel, and aluminum), and other toxins. Viral infections of the liver, hyperthyroidism, consumption of anabolic steroids/estrogens/oral contraceptives are some other factors that can restrict the bile flow in the liver and cause impaired liver function. Lack of physical activities, poor diet, aging, etc., are some other common causes for sluggish liver function.

Some signs or indications that may help to identify if the liver is sluggish or not functioning properly:

Anorexia refers to a lack or loss of appetite, resulting in the inability to eat.

The condition may result from poorly prepared food or surroundings, unfavourable company, or various physical and psychological causes. The liver disorders such as hepatitis, sluggish liver, etc. also lead to anorexia.

Dyspepsia, also known as upset stomach or indigestion, refers to a condition of impaired digestion.

It is a medical condition characterized by chronic or recurrent pain in the upper abdomen, upper abdominal fullness and feeling full earlier than expected when eating. It can be accompanied by bloating, belching, nausea, or heartburn. Dyspepsia is a common problem, and is frequently due to gastro-oesophageal reflux disease (GERD) or gastritis. Liver disorders, such as hepatitis, cirrhosis, etc., also lead to dyspepsia.

Flatulence is the expulsion through the rectum of a mixture of gases that are by-products of the digestion process of human beings. The mixture of gases is known as flatus in medical speak, informally as a fart, or simply gas, and is expelled from the rectum in a process colloquially referred to as "passing gas", "breaking wind" or "farting". There are many reasons for flatulence. Some people with liver disease complain of increased gas production (flatulence), abdominal bloating, and abdominal distension. These symptoms may stem from mal-absorption (impaired absorption) and/or mal-digestion (impaired digestion) of certain nutrients by the body. These symptoms are especially likely to occur in people with alcoholic liver disease and cirrhosis.

Constipation refers to bowel movements that are infrequent and/or hard to pass.

Constipation is a common cause of painful defecation. Severe constipation includes failure to pass stools or gas. Constipation is a symptom with many causes. Liver congestion can lead to chronic constipation. Liver congestion is caused by the negative effects of a bad diet. Over time, a low fibre, high fat, processed food diet along with more of a sedentary lifestyle will contribute to slowing down of bile flow within the liver, resulting in chronic constipation. Good bile flow is the key to free moving bowels that effectively empty themselves frequently.

In some cases, the symptoms are relieved by bowel movements. Diarrhoea or constipation may predominate, or they may alternate. IBS may begin after an infection, a stressful life event, or onset of maturity without any other medical indicators. Liver disorders, such as hepatitis, also lead to IBS.

Excessive Gaseous Distension is swelling of abdomen due to gas in the intestinal tract. It can be caused by many reasons from overeating to a more serious medical condition.

Some people with liver disease complain of increased gas production, abdominal bloating, and abdominal distension. These symptoms may stem from mal-absorption (impaired absorption) and/or mal-digestion (impaired digestion) of certain nutrients by the body. These symptoms are especially likely to occur in people with alcoholic liver disease and cirrhosis.