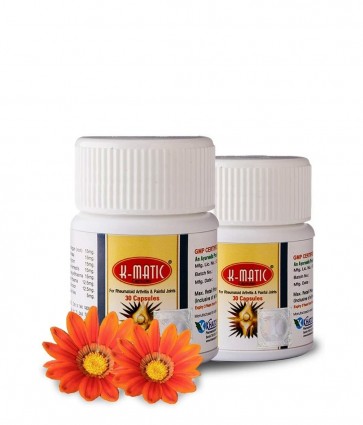 K-MATIC is an innovative ayurvedic formula made up of twenty-one selected ayurvedic ingredients that have a synergistic effect on rheumatoid arthritis and related complications. K-MATIC is a multidimensional ayurvedic treatment since it acts as an anti-inflammatory, an anti-spasmodic, an anti-arthritic and an analgesic. It has excellent effects on the musculo-skeletal system, the neuro-muscular system, as well as on the joints. Since it is a muscle relaxant, it effectively treats muscular sprains and spasms.

K-MATIC is a comprehensive ayurvedic remedy for all types of arthritis and rheumatic disorders.

Rheumatoid arthritis is a disease that causes chronic inflammation of the joints.

Rheumatoid arthritis can also cause inflammation of the tissue around the joints, as well as in other organs in the body. It is a form of arthritis that causes pain, swelling, stiffness and loss of function in your joints. It can affect any joint but is common in the wrist and fingers. While rheumatoid arthritis is a chronic illness, meaning it can last for years, patients may experience long periods without symptoms. However, rheumatoid arthritis is typically a progressive illness that has the potential to cause joint destruction and functional disability.

Rheumatoid arthritis is a form of More women than men get rheumatoid arthritis. It often starts between ages 25 and 55. You might have the disease for only a short time, or symptoms might come and go. The severe form can last a lifetime.

The small joint at the base of the big toe is the most common site of an acute gout attack of arthritis.

Other joints that are commonly affected include the ankles, knees, wrists, fingers, and elbows. Joint pain usually begins over 2–4 hours and during the night. The reason for onset at night is due to the lower body temperature then. Other symptoms that may occur along with the joint pain include fatigue and a high fever.

Gout is a disease that results from an overload of uric acid in the body. This overload of uric acid leads to the formation of tiny crystals of urate that deposit in tissues of the body, especially the joints. When crystals form in the joints, it causes recurring attacks of joint inflammation (arthritis). Gout is considered a chronic and progressive disease. Chronic gout can also lead to deposits of hard lumps of uric acid in the tissues, particularly in and around the joints and may cause joint destruction, decreased kidney function, and kidney stones. Gout is nine times more common in men than in women. It predominantly attacks males after puberty, with a peak age of 75. In women, gout attacks usually occur after menopause.

Ankylosing Spondylosis is the stiffening or fusing of bones in the spine.

Ankylosing Spondylosis is the stiffening or joining together of bones in the spine due to degenerative changes caused by the old age. Over time, the elasticity of the ligaments and tendons may be replaced by rigid, fused bone, and flexible movement of the spine may become increasingly restricted.

Traumatic Synovitis is the inflammation of a synovial (joint-lining) membrane and is characterized by swelling, due to effusion (fluid collection) in a synovial sac.

(A Synovial joint is the most common and most movable type of joint in the body).

Lower back pain (or lumbago) is a common musculoskeletal disorder affecting 80% of people at some point in their lives.

It accounts for more sick leave and disability than any other medical condition. It can be acute, sub-acute or chronic in duration

It may be caused by a weak or strained back muscle, torn ligaments, a herniated disk, compression of the sciatic nerve (sciatica), degenerative disease of the vertebrae (spondylosis), curvature of the spine (scoliosis), or loss of bone mass (osteoporosis).

Arthralgia, or joint pain, is a symptom of injury, infection, illnesses (in particular arthritis) or an allergic reaction to medication.

The causes of arthralgia are varied and range from degenerative and destructive processes, such as osteoarthritis and sports injuries, to inflammation of tissues surrounding the joints. It can be caused by many reasons such as gout, rheumatoid arthritis, etc.

Joint inflammation is the body’s reaction to various diseases or conditions.

The joint inflammation can be caused by many reasons such as osteoarthritis, gout, rheumatoid arthritis, etc.

Osteoarthritis is the most common form of arthritis.

People frequently see osteoarthritis as being a progressive and disabling disease. Some people do experience symptoms of severe pain and stiffness. But for many, symptoms are mild and cause only temporary and occasional problems. Osteoarthritis is a condition involving the breakdown of the protective cushion of the cartilage covering the ends of the bones where two bones meet to form a joint. Osteoarthritis is due to changes within the cartilage cells which lead to a loss of elasticity. Over a period of time, the cartilage thins and may even break down leaving the bones unprotected. As a result, the joint loses its smooth functioning.

The main symptom is pain, causing loss of ability and often stiffness. "Pain" is generally described as a sharp ache, or a burning sensation in the associate muscles and tendons. Osteoarthritis can cause a crackling noise (called "crepitus") when the affected joint is moved or touched, and patients may experience muscle spasms and contractions in the tendons.

Occasionally, the joints may also be filled with fluid. Humid and cold weather increases the pain in many patients. Osteoarthritis commonly affects the hands, feet, spine, and the large weight bearing joints, such as the hips and knees, although in theory, any joint in the body can be affected. As osteoarthritis progresses, the affected joints appear larger, are stiff and painful, and usually feel worse, the more they are used throughout the day. In smaller joints, such as at the fingers, hard bony enlargements may form, and though they are not necessarily painful, they do limit the movement of the fingers significantly. Osteoarthritis at the toes leads to the enlargement of bones or tissue, rendering them red or swollen. Some people notice these physical changes before they experience any pain. Osteoarthritis is the most common cause of joint effusion, sometimes called water on the knee in lay terms, an accumulation of excess fluid in or around the knee joint.

It is an intensely painful infection in a joint. Bacteria, or less commonly fungi, can spread from other infected areas in your body to a joint. In septic arthritis, germs infiltrate your joint — usually just one — and damage it, causing severe pain, warmth and swelling. Bacteria most commonly target your knee, though other joints can be affected by septic arthritis, including your ankle, hip, wrist, elbow and shoulder. Young children and older adults are most likely to develop septic arthritis.

Septic arthritis typically causes extreme discomfort and difficulty in using the affected joint. Signs and symptoms may include:

If you're taking medications for other types of arthritis, you may not feel severe pain with septic arthritis because those medications may mask the pain and fever. In adults, the joints of the arms and legs — especially the knees — are most commonly affected by septic arthritis. In children, the hip is the joint most likely to be affected. Children with septic arthritis of the hip often hold their hip in a fixed position and try to avoid any joint rotation. In rare cases other joints, such as those in the back, neck and head, may be affected.

Septic arthritis may develop when an infection elsewhere in your body, such as an upper respiratory tract infection or urinary tract infection, spreads through your bloodstream to a joint. Less commonly, a puncture wound, drug injection or surgery near a joint may allow bacteria into the joint space.

Parkinsonism refers to any condition that causes a combination of the movement abnormalities seen in Parkinson's disease.

Parkinsonism refers to any condition that causes a combination of the movement abnormalities seen in Parkinson's disease — such as tremors, slow movement, impaired speech or muscle stiffness — resulting from the loss of dopamine-containing nerve cells (neurons). Not everyone who has parkinsonism has Parkinson's disease. Other causes of parkinsonism include:

Sciatica refers to pain that radiates along the path of the sciatic nerve and its branches — from the back down the buttock and leg.

The sciatic nerve is the longest nerve in the body. It runs from the spinal cord to the buttock and hip area and down the back of each leg. Sciatica is a symptom, not a disorder. The radiating pain of sciatica signals another problem involving the nerve, such as a herniated disk.

Common symptoms of sciatica include:

1) Pain in the rear or leg that is worse when sitting
2) Burning or tingling down the leg
3) Weakness, numbness, or difficulty moving the leg or foot
4) A constant pain on one side of the rear
5) A shooting pain that makes it difficult to stand up

Neuralgia is pain in a nerve pathway.

Generally, neuralgia isn’t an illness in its own right, but a symptom of injury or a particular disorder. In many cases, the cause of the pain is not known. Older people are most susceptible, but people of any age can be affected. Almost everyone will experience mild neuralgia at some point, but these bouts are usually temporary and tend to ease by themselves within a few days. Some types of neuralgia are longer lasting, debilitating and so agonizing that a person’s quality of life is severely reduced. Trigeminal neuralgia, a condition that usually affects one side of the face only, is said to be one of the most painful medical conditions. Neuralgia can be managed with medications and physical therapy. Surgery is an option in some resistant cases.

The symptoms of neuralgia include:
Nerve inflammation (neuritis) can trigger neuralgia. Causes of neuritis include:

The inflammatory myopathies are a group of disorders characterized by inflammation and weakness mainly of the muscles closest to the trunk of the body (proximal muscles). Myositis may be associated with inflammation in other organs, including the joints, heart, lungs, intestines and skin. Muscle inflammation also can occur in people with other rheumatic diseases, such as rheumatoid arthritis, lupus and scleroderma.

Paralysis is the loss of muscle function of one or more muscles.

Paralysis can be accompanied by a loss of feeling (sensory loss) in the affected area if there is sensory damage as well as motor. Paralysis is most often caused by damage in the nervous system, especially the spinal cord. Some of the other major causes are stroke, trauma with nerve injury, poliomyelitis, etc.